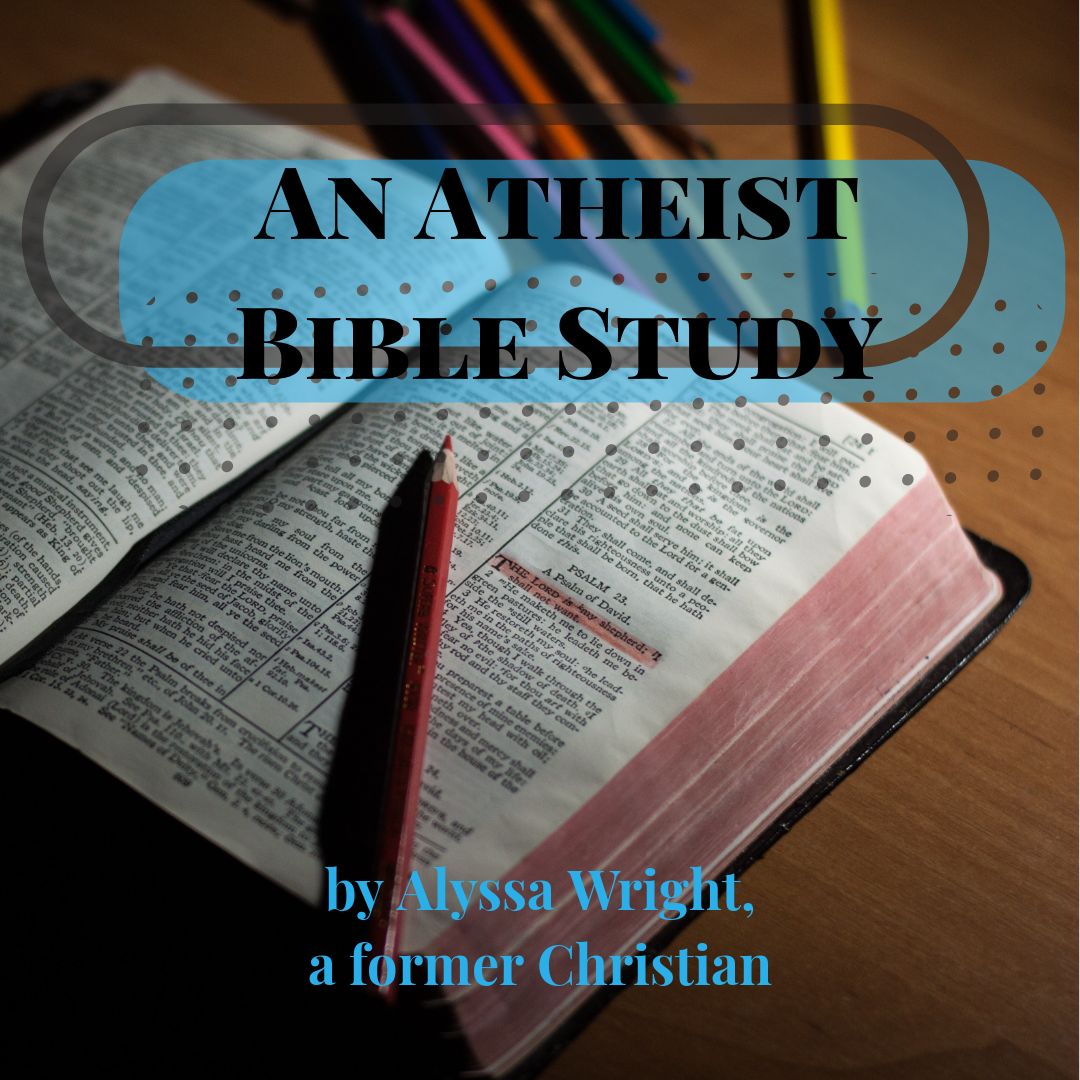 When I was a Christian I set out to read the whole Bible. I have never actually done it. Now that I’m an atheist, I want to know what the Bible says. Not what people claim it says, but what it really, truly says.

I want to first make a disclaimer. I am not a theologian. I am a layperson. I went to church for 16 1/2 of my 18 years. I went to a Christian school for all but two years of my schooling. That included daily Bible study classes, and my two years of dual-enrollment included theology and evangelism classes. I was surrounded by the Bible, a biblical perspective, and Christian teachings my whole life. So I am approaching the text not so much as a scholar but as a normal, everyday sort of person. Please comment if my post contains any misinformation, with sources supporting your claim.
This post is based on my personal reading and informed by my experience in Christian circles as described above.

Genesis 1 describes how God created the world in 6 days and rested on the 7th. This is familiar.
But the order is a bit odd.
Light, sky, land and seas and plants, sun and moon, fish and birds, and finally all land animals and two humans.
God made the light before the light sources. The moon is treated as its own light source, though it reflects the sun. God also created plants before the sun. How did they not die without the heat it provides?
Genesis 2:5a & 7 (NIV) says, “Now no shrub had yet appeared on the earth and no plant had yet sprung up… Then the Lord God formed a man from the dust of the ground and breathed into his nostrils the breath of life, and the man became a living being.” That appears somewhat contradictory to the story that God created plants days before humans.

Chapter 3: The Fall/Introduction of Sin

Genesis 3 describes how sin entered God’s perfect creation and has subsequently been passed from generation to generation. Sin is frequently defined as anything someone thinks, says, or does that God disapproves of.
God tells Adam and Eve not to eat fruit from a certain tree in the Garden of Eden or they will die.
A serpent, said to be Satan, tells Eve about the benefits of eating the fruit in Genesis 3:4-5, “‘You will not certainly die,’ the serpent said to the woman. ‘For God knows that when you eat from it your eyes will be opened, and you will be like God, knowing good and evil.'”
After they eat it, they realize they are naked, sew clothes from leaves, and then hide from God. Once they come out, God asked what they did. Adam pointed to Eve who pointed to the serpent. Christians point out that they shouldn’t have blamed others for their actions. God not only punishes Adam and Eve for eating the fruit but also the serpent for convincing them to eat it.
Instead of Adam and Eve being killed by God, they are kicked out of the garden. Christians often say that they died a spiritual death and after eating the fruit they were separated from God until their eventual physical death. I don’t know if that is the case or added later to explain the (seeming?) inconsistency. In Genesis 3:22 (NIV), “And the Lord God said, ‘The man has now become like one of us, knowing good and evil. He must not be allowed to reach out his hand and take also from the tree of life and eat, and live forever.'” This could be how their physical death would come to pass. It reads more as though they were not immortal at all, except by eating fruit from that tree.

Some time passes and Adam and Eve have two sons (and presumably some other unnamed children), Cain and Abel. Cain is a gardener and Abel is a shepherd.
They both make sacrifices to God, giving what they have. Abel offers a lamb, and God accepts the sacrifice by burning it. Cain offers some of the harvest from his garden, and God gets mad at Cain. Cain then kills Abel out of jealousy, and God rebukes him. Cain is cast out, marries his sister, and gets some kind of mark so no one will kill him.
God has not given instructions for proper offerings, and it’s unclear why he rejected Cain’s offering. Cain offered what he worked hard to earn/produce, and God rejected it.
She has no name, but Cain had to have married his sister. A lot of people in Genesis marry their siblings, cousins, or other close relatives. Yet no problems from inbreeding are ever mentioned, and they continue to do it. Later on, the Israelites are told not to marry non-Israelites. They all basically descend from 12 brothers, with some unrelated wives at some points in the genealogy, but still no issues? Also, if God is all-knowing (omniscient) as a lot of Christian teaching claims, couldn’t he have thought to make more humans to increase the diversity of the gene pool? Two humans for all people ever to descend from is tiny!

I grouped Genesis 1-4 because they are all closely tied together. Next time I’ll work through Genesis 5-10, the story of Noah.